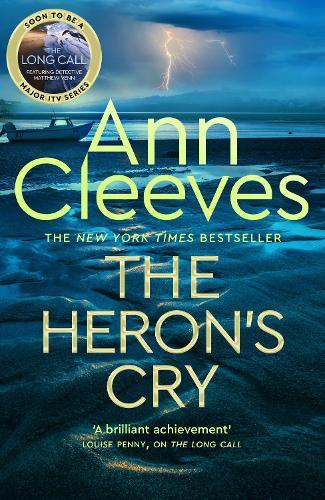 The No.1 Sunday Times bestselling series featuring Detective Matthew Venn, from author and creator of the Vera and Shetland series, Ann Cleeves - soon to be a major TV series.

North Devon is enjoying a rare hot summer with tourists flocking to its coastline. Detective Matthew Venn is called out to a rural crime scene at the home of a group of artists. What he finds is an elaborately staged murder – Dr Nigel Yeo has been fatally stabbed. His daughter Eve is a glassblower, and the murder weapon is a shard of one of her broken vases.

Dr Yeo seems an unlikely murder victim. He’s a good man, a public servant, beloved by his daughter. Matthew is unnerved though to find that she is a close friend of Jonathan, his husband.

Then another body is found – killed in a similar way. Matthew finds himself treading carefully through the lies that fester at the heart of his community and a case that is dangerously close to home . . .

The Heron's Cry is the second novel in Ann Cleeves’ Two Rivers following her Sunday Times bestseller, The Long Call.